Laura Theresa Epps Alma-Tadema and life in the shadows

Leighton House Museum, that idyll of Orientalist splendour with Arab halls, resplendent Gold domes and embellished mosaics, are trying to revive the reputation of Lawrence Alma-Tadema. Who you might ask?

The Dutch painter who made London his home during the late 19th century lost favour with ‘Joe public’ as tastes changed and the Victorians began to seem downright parochial. And it was not a modest fall from grace. One of Alma-Tadema’s now most celebrated masterpieces of Moses being rescued from the River Nile by the Pharaoh’s daughter was once bought by an art dealer simply for it’s glitzy frame and unceremoniously dumped in a backstreet after it was removed.

But this show is not all about Lawrence Alma-Tadema. Emerging from the shadows is another artist who’s work has been similarly overlooked. Alma-Tadema’s wife, the mysterious Laura Theresa Epps Alma-Tadema. 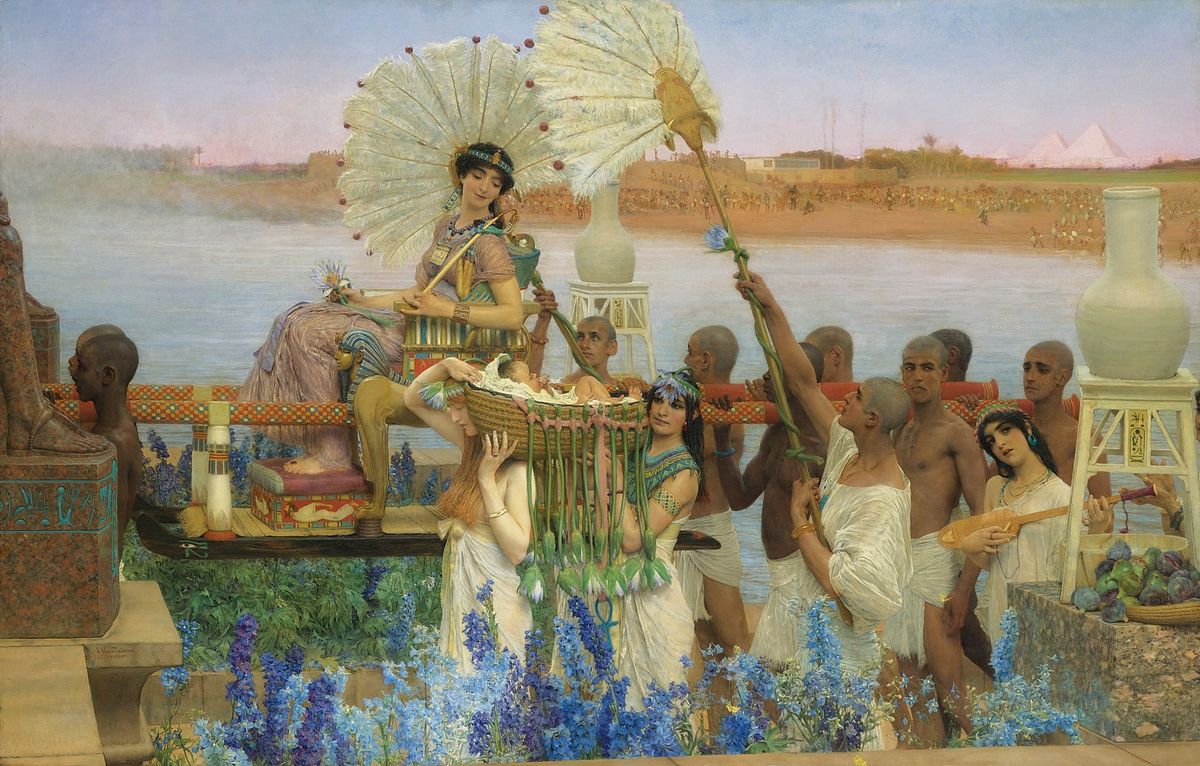 Lawrence Alma-Tadema, The Finding of Moses (1904)

As an impressionable 17 year-old, Laura Epps met the mischievous and gregarious artist Alma-Tadema at a gathering of London society. The daughter of a well-to-do doctor and a great beauty, Laura immediately caught Alma-Tadema’s attention and he soon returned to London on the pretext of giving her painting lessons. Is there an older trick in the book? A year later Lawrence uprooted his family and moved to London permanently to marry Laura, who became mother to the artist’s two young daughters Laurence and Anna from his first marriage. While Laura became known for her glorious hostess skills at Grove End Road and a frequent model for her new husband and other artists including Jules Dalou and Jules Bastien-Lepage; she was also a phenomenal painter in her own right. How much of these new found talents were down to Alma-Tadema’s instruction? That is up to interpretation.

Lawrence-Alma Tadema was already surrounded by creative women as both his daughters showed signs of artistic talent, and Laura had similarly grown-up in a throng of artists and musicians. It’s hardly surprising then that Laura’s two sisters Emily and Ellen Epps also took up painting, studying under the Pre-Raphaelite John Brett and illustrious Ford Madox Brown.

Like other female artists trying to be taken seriously in the man’s world of Victorian London, Laura took to painting domestic scenes of family life – her best source of inspiration whether she liked it or not. Reminiscent of Dutch 17th century interiors, Laura also looked to the classical subjects of Ancient Rome and Egypt that obsessed Mr Alma-Tadema. Light, colour and beautiful texture are all at the heart of her work, which is far beyond any amateur pastime.

To give you a little idea of the success she had during her life, Laura exhibited at the Paris Salon in 1873 followed by the Paris International Exhibition in 1878. Not only was she finding success of her own, Laura was one of the few female English artists getting any air time on the continent. Back in London, Laura exhibited at the Royal Academy and Grosvenor Gallery, with regular commissions for the English Illustrated Magazine. But since her early death in 1909 and memorial exhibition at the Fine Art society, Laura Theresa Epps Alma-Tadema seems to have fallen off the map entirely. A handful of works can be found at the National Portrait Gallery and Manchester Art Gallery in the UK, and a few others are scattered across the USA. But for the most part Laura’s finest paintings have found their way into private collections. And the question remains whether they will ever surface again?

Like a long line of artist’s wives that followed her like Helen Frankenthaler and Lee Krasner, Laura Epps will have to fight twice as hard to be heard. And jumping on the bandwagon of her husband’s revival at Leighton House is definitely a step in the right direction.