The latest blockbuster to take the stage at London’s National Portrait Gallery has an unlikely star performer. Step aside Mont Sainte-Victoire and so long to you bowls of fruit – the real leading lady of Cézanne’s Portraits is the oval-faced bookbinder turned artist’s model, Marie-Hortense Fiquet.

Cézanne met the young woman that would become his wife in 1869 when he was studying his craft at the Académie Suisse in Paris beside the likes of Camille Pissarro. Transfixed by Hortense’s curious beauty, with her angular face and central parting of auburn hair, Cézanne painted her more than anyone else during his lifetime. At the National Portrait Gallery, her round eyes stare out from the walls like the faint memory of a life lived in the shadow of a great artist. 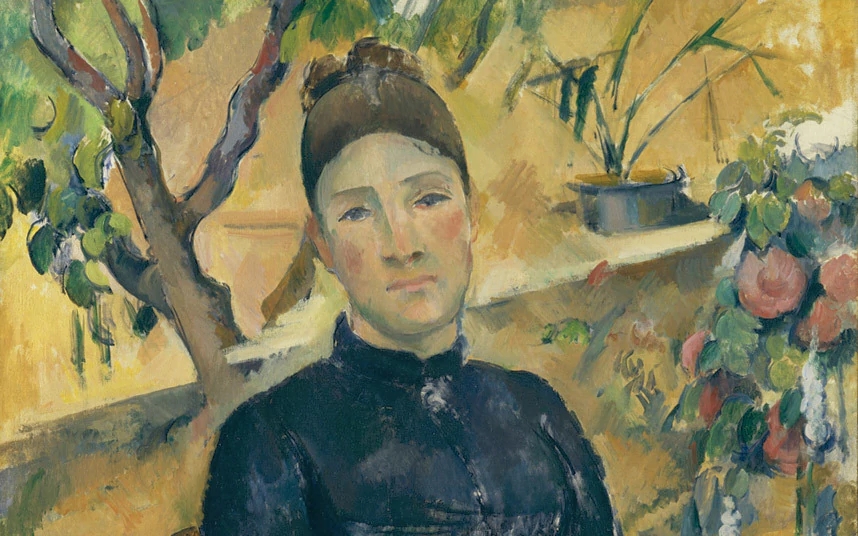 But in comparison to most artists’ other halves, from Dora Maar to Amélie Matisse, Hortense has been dealt a pretty terrible hand. In fact, she has been downright demonised. In History of Art 1-0-1, I remember learning the undisputed truth that Cézanne was a loner and his wife was extremely difficult. But for someone that Roger Fry dubbed ‘a sour-faced bitch’ and Emile Zola referred to as mere ‘dust’, she was certainly happy to play the artist’s muse.

The story goes that Cézanne, the son of a wealthy banker, gravitated towards Hortense as much as he was repulsed by her low station. And the work that appeared in his studio over the years fanned the flames as Hortense appeared scowling and glum. Rumours swirled that Cézanne’s girl was aloof and unreasonable – his friends were baffled by the attachment.

It’s true that Hortense often looks stoney-faced, perhaps even a little crotchety in her portraits. But she certainly had reason to be a bit miffed. For one thing Cézanne was a notoriously abrasive character and hardly a bed of roses to live with let alone sit for. He was painfully slow in his process and demanded absolute stillness from his models – which luckily Hortense had a certain knack for. When they finally married in 1886, Cézanne was far from gentlemanly in his loud complaints to anyone that would listen that he had fallen out of love with Hortense and was only marrying her to make their son Paul legitimate. From that point on the couple lived very separate lives, though Cézanne continued to paint Hortense over 29 times. When Cézanne died in 1906, he hammered the final nail into the coffin by disinheriting Hortense and bequeathing his entire fortune to Paul.

With all this bad blood, it’s hardly surprising that Hortense is viewed with some distaste by history. It’s hard to shake off those initial mutterings from the most powerful artists and critics of the day, which have since translated into what we perceive as historical truth. Whispers that she missed Cézanne’s dying moments because she was dress shopping follow her and even Matisse suggested that she did not care about art at all, only how much money it raked in (something that Matisse would have found abhorrent).

Of course there are holes in the argument because there are some images of Hortense that show a greater warmth and emotion. Just take the painting of Hortense breastfeeding from 1872 (now hidden away in a private collection). A deeply intimate and tender moment, it’s hardly the making of a villain. However, even these moments have been challenged. The famed art theorist Meyer Schapiro suggested that any sense of feeling that we see on Hortense’s face was not really her, but a projection of the artist’s inner emotion. Evidently the opposite could never be true.

Crucially, Hortense became the human embodiment of Cézanne’s famous cylinders, spheres and cones, which he returned to over and over again. Was he that self-punishing to spend time with a woman he detested? Or was Hortense actually very different to her bad reputation? It was Cézanne that kept his wife as a shameful secret, hidden away at a distance. So much so that the art world intelligentsia saw her as irrelevant.

Who said romance is dead.

What’s unsettling is that Hortense’s story is so familiar. So she was annoyed at her boyfriend for ignoring her. So she didn’t want to hobnob with art world aficionados. Did she really deserve to be the villain of the story? If Hortense had been allowed to answer her critics we might have a very different idea of life in the Cézanne house. For now though we are stuck with the predictable narrative of the ‘difficult’ woman and all the pesky connotations that go along with it.