“What are you, the Beethoven of organs?” comes the first insult. “I’m the heart of the matter!” comes the searing the reply. “You’re the VP of Gore!” “You’re the Pollock of splatter!”

This slanging match is taking place between a churlish liver and a prima donna heart that lie exposed on an operating table. As the pathologist arrives to examine the cadaver, the organs continue to hurl abuse and try to blame each other for the body’s current predicament. It is a strange embodiment of the age-old mantra – head over heart or mind over matter.

American artist Mary Reid Kelley has forged her reputation with these kind of surreal moments in ultra-stylised black and white films that are made in collaboration with her husband Patrick and inspired by the pages of history and literature. The films are often one-woman affairs as Reid Kelley casts herself as a host of characters who have never had much airtime before. For that reason, Reid Kelley’s sharply witty films tend towards a feminist outlook that give figures like the First World War Belgian prostitute and the female factory worker a voice for the first time. Tate Liverpool’s Assistant Curator, Lauren Barnes, explains that these bitingly sardonic and playful works, which combine fine art, performance and poetry are probably best described as “animated paintings.” 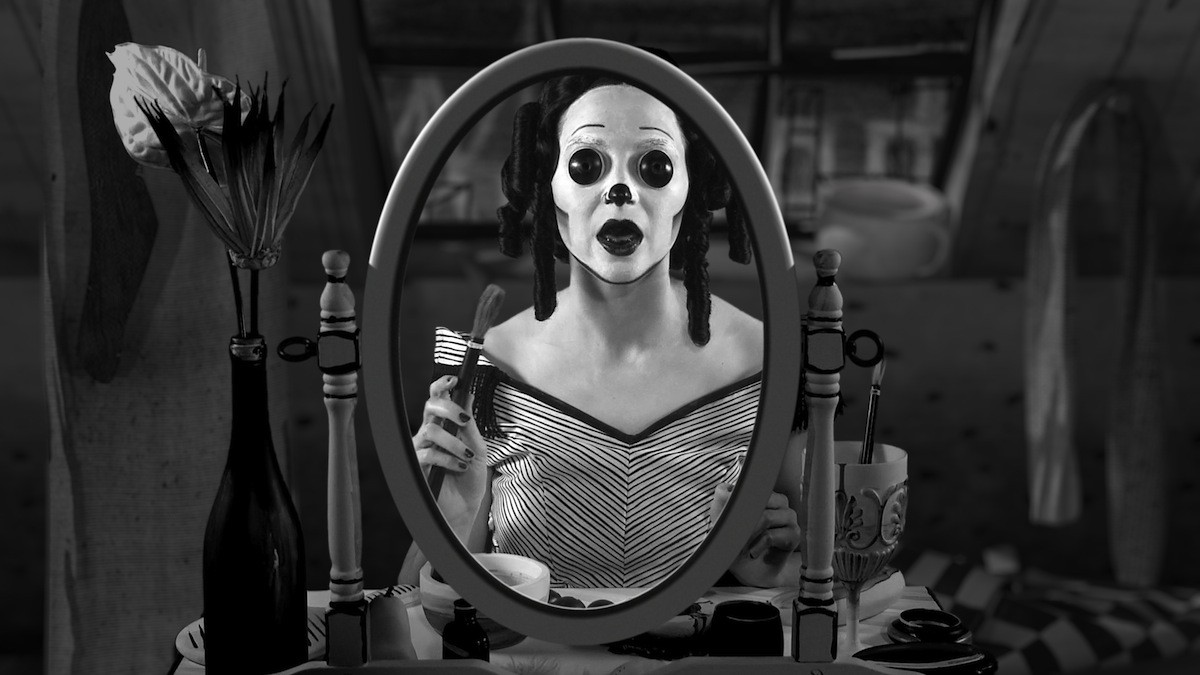 For her exhibition ‘We are Ghosts’ at Tate Liverpool, Reid Kelley showcases two films: the tragicomic story of a suicide victim titled ‘This is Offal’ (2016) and the tale of a Second World War American submarine called ‘In the Body of Sturgeon’ (2017). This show, alongside Joan Jonas’s major retrospective at Tate Modern, demonstrates Tate’s new commitment to introducing more performance and video art into its exhibition programme. While this might be her first solo outing at a UK institution, Reid Kelley’s work is already well known on British shores. Represented by the leading contemporary gallery Pilar Corrias, the set for the Sturgeon submarine was exhibited at Frieze London in 2017.

‘This is Offal’ began as a live performance for Tate Modern in 2015. The women who have met their watery ends in the river Thames inspired this sombre tale of a drowning victim and her squabbling innards. In constructing the film, Reid Kelly turned to Thomas Hood’s poem ‘The Bridge of Sighs’ (1844) in which a woman leaps into the river from Waterloo Bridge. Hood glamorised the beauty of the alabaster female corpse as a macabre 19th century fetish, akin to John Millais’s Pre-Raphaelite painting of Ophelia drifting downstream. Reid Kelley’s distinctive take on the subject makes a parody of the gorgeous suicide victim by highlighting her sensuality in dark lines around her breasts beside the ghastly slash down her sternum. 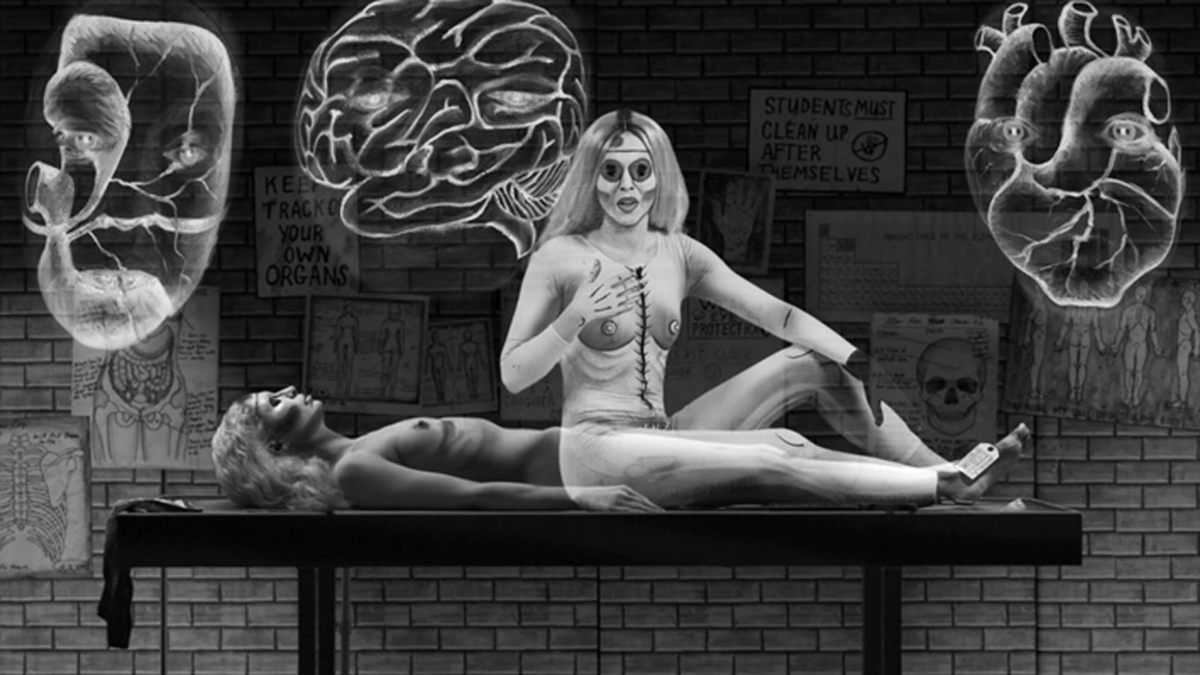 Reid Kelley gives a voice to this damsel in distress and teases what her ghost may have been like in life. As she primps her decaying body, the deceased delights in the attention of it all, crying: “Luckily my carcass is so clever / It found a way to stay on earth forever!” Patrick Reid Kelley, playing the part of the pathologist, puts her vanity into perspective when he laments: “I wish these people thought about the feelings / Of those who cut their bodies down from ceilings.”

The second film is a new Tate commission and changes tack with a tale from American history. This is a true ghost story from the body of a Second World War submarine where the voices of drowned sailors are heard once more: “No one knows us, no one heeds us, / Hidden in the • mighty Sturgeon.” For this film, Reid Kelley transforms herself into a scantily clad sailor in drag, a young boy in despair and even President Harry Truman announcing a possible nuclear attack from Cuba. Reid Kelley casts a rhythmic spell with a script constructed entirely from fragments of phrases and words in Henry Wadsworth Longfellow’s epic poem ‘The Song of Hiawatha’. By cutting and pasting Longfellow’s verse, Reid Kelley pokes fun at the poet’s original patchwork of Native American stories and reminds the viewer that there can be several sides to a familiar tale.

Reid Kelley’s use of language is vital to her practice as it plays a powerful role in bringing remote narratives from the past into contemporary syntax. With her double puns and quick quips, Reid Kelley forces the audience to listen carefully to each word these forgotten figures have to say. Like the strict set of rules that language has to abide by, Reid Kelley also controls the severe monochromatic palette and cast of players in her films.

At Tate Liverpool, the key characters from the two films are shown in several light boxes, which reveal the intricate craftsmanship of their clothes and makeup. While Reid Kelley shies away from the “made quality” of her work, it is hard to separate these films from the artistry of their sets and costumes. Her flamboyant attires allow Reid Kelley to negotiate the line between comedy and tragedy, the profound and the ridiculous, akin to dada performer Hugo Ball in his lobster costume at the Cabaret Voltaire in 1916. These fearless makeovers also align Reid Kelley with chameleon female artists Cindy Sherman and Gillian Wearing.

Consequently, we should address Reid Kelley’s films as part of the canon of female performance, which Sally Potter describes in her essay for the ICA’s 1980 exhibition on pioneering women artists: “woman as entertainer is a history of varying manifestations of female oppression, disguised, romanticised.” Through her own bold transformations, Reid Kelley makes a crucial commentary on the sliding scale of gender and the essential nature of human existence. Perhaps her dolled-up corpse said it perfectly when she exclaimed: “I stink, therefore I am! Cast off all / Vanity ‘cause This is Offal!”

For her first outing at a public British institution, Reid Kelley’s wry exhibition both challenges and delights; going some way to establishing her reputation as an international force to be reckoned with.

On a lunchtime stroll seeking inspiration I came upon Paul Feeley’s show at Waddington Custot and what a inspiration! 💛Feeley is a little known artist associated with the rise of American Abstract Expressionism, but was equally a significant curator who worked alongside Clement Greenberg and even taught Helen Frankenthaler at Bennington College. His luscious organic shapes, stained onto canvas draw us into a natural world of fluctuating skies and shifting landscapes.
Not a bad walk to work 🌈☀️🌿
Rachel Whiteread’s remarkable new show at Gagosian - a departure from those fossilised spaces beneath, around and inside humble objects that we know her for, with two new tumbledown sheds, crumbling into ruins in the gallery.
OK, so this was a delight ✨- a much needed injection of art related joy from Lucy Sparrow and her fully-stocked chemist made entirely from felt, at Lyndsey Ingram’s gallery - thank you NFS! (National Felt Service 😅)
Whispers of spring from Megan Rooney in these wonderfully evocative paintings sequestered away in a quiet corner at Thaddaeus Ropac.
A side thought away from fine art but phew...what a read Joan Didion’s ‘The Year of Magical Thinking’ was... I’ve been thinking a lot about the residue of childhood grief for a new project recently and this was such a beautiful, delicate tale of Didion’s own journey.