Camaraderie, backstabbing and the gallery system

During some recent water-cooler chat, a colleague of mine was lamenting the death-grip of the gallery model. In fact, he was arguing that galleries stop artists from collaborating  altogether and force them to compete with each other instead.

As we’ve heard in countless articles, lectures and podcasts on the subject – galleries as we know them are dying. The idea of a program of exhibitions and a roster of artists is fast becoming outdated thanks to a generation who are happy to buy their art straight from Instagram. But have we overlooked another big problem staring us in the face? The gallery system has also done a number on the way we nurture and think about artists.

With the help of the market, a certain roster of big-ticket names have become trophies for the rich and famous, and the gallery model has scrambled to reflect this method of buying art through its relationships with artists. In the most delicate way possible, the gallerist-cum-kingmaker must convince their artists to make stuff that will fundamentally sell.

Of course to be an artist by nature you also need to be able to blow your own trumpet and sell yourself a bit – it’s just part of the game. Some of the most famous artists have been some of the best marketeers – just take a look at Andy Warhol, Jeff Koons or Damien Hirst. Which ever way you spin it, making art is a competitive affair. But does that mean it has to happen in isolation? 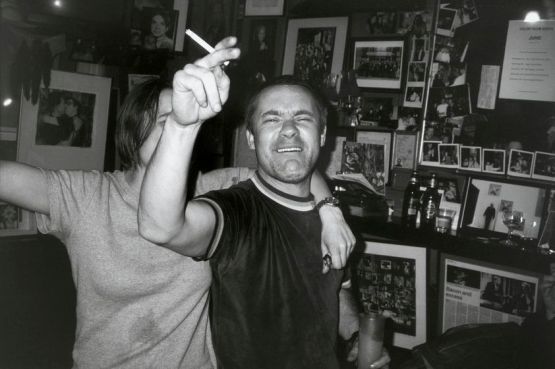 Sarah Lucas and Damien Hirst at the Colony Room Club

The last time Britain saw a group of artists transcend the gallery model and lift each other up in the process was the YBAs (Young British Artists), led by an ambitious Hirst. This raucous and fearless collective erupted out of Goldsmiths in the ’90s and challenged the establishment by putting on their own exhibition called ‘Freeze’ at the Surrey Docks in south-east London. Little could they have known it would be one of the defining moments in 20th century British art.

Before the YBAs there was Francis Bacon, Lucian Freud and friends swilling whisky in Soho’s dingiest clubs and bars. And before that were the avant-garde artists sheltering from war along the windswept coasts of Cornwall with Barbara Hepworth and Peter Lanyon. These groups possessed an innate rivalry and passion that spurred each other on and created some pretty spectacular artwork along the way.

In London there are a few artist-run spaces where a supportive network allows artists to get a fair showing, including CGP in Southwark Park and Dilston Grove, Yinka Shonibare’s Guest Projects and Beaconsfield Gallery just a hop skip and a jump from Damien Hirst’s place in Vauxhall. These galleries liberate artists from stuffy dealers, who would dictate the work shown on their walls and give young artists a chance to cut their teeth at curating and exhibiting. Instead of answering to the market, these artists answer to themselves and their creative instincts alone (with one eye on the money of course).

It’s fair to say that the gallery model is tough. Getting represented by a gallery worth its salt is tough. And by in large, a lot of artists fall through the cracks, least of all because not every artist can afford to attend an art school where they are seen by a gallery with enough capital and clout.

But how would it be if we banned the gallery altogether and encouraged artists to turn to each other for help instead? Would we just become a generation of Instagram hoarders? We shouldn’t let a market and an antiquated gallery model keep artists in a stranglehold for cash or worse – in isolation. Great art was never made in a vacuum and we all love a story of an embattled group of artists waging war on the establishment.

‘In an exhibition of works by the South African-born artist Lisa Brice, a new cohort of women have taken up residence at Charleston. Like Woolf and Bell, they seem intent on carving out a space of their own. Through plumes of smoke, the women appear chiefly as artists in the studio—taking up position in front of the easel, selecting a canvas, and raising a brush to its surface. Often nude, the women are their own models. They gaze intently at the reflections of their lithe bodies as they simultaneously use mirrors to disguise them. They are bold and nonchalant, swigging from beer bottles and puffing on cigarettes. Each is painted in shades of blue that render them curiously anonymous. And yet, their mission is clear. We feel as if we might have stumbled into the world of Charleston quite uninvited.’
Little one admiring Jean Dubuffet’s mesmeric ‘Texturologies’ at the Barbican, capturing the ‘teeming matter, alive and sparkling’ of soil as he lived and worked in Vence during the late 1950s.
‘The aim is to make the spectator consider all the elements in the ensemble capable of movement and not just those which are in fact mobile . . . achieved through the visible continuity or lack of differentiation between the static cut-outs and the elements endowed with movement. If a contrast is felt between the immobile elements and the costumed personnages animated by actors, then we will have failed. The viewer . . . should be confronted by an ensemble in which all parts are alive, and in all parts of which at any moment potential figures may appear.’
‘But I also wanted to draw and concoct my own sculpture that came out of painting - only the difference was, there were no edges or corners to cope with, but new considerations of space and air and weight…’
Tesfaye Urgessa’s complex, absorbing paintings are on view at Saatchi Yates this summer - there have already been many rumblings about the Berlin-based, Ethiopian artist and what a pleasure to be subsumed by his works, filled with nuances of human gestures and relationships, the experience of culture and race.
Christopher Hartmann’s exquisite paintings at Hannah Barry, so much imbued with a longing for touch and physical sensation, the press of a thumb against flesh and the dewy surface of skin.