What’s eating art fairs? The rise and fall of the immersive stand

It’s 2014. A time before ‘He Who Must Not Be Named’ has moved into the White House and even before the word Brexit has been uttered. It’s a warm afternoon in October in Regent’s Park and the great and good of the art world have flocked to the first preview of Frieze Masters – the sister fair of the slightly showier Frieze London that specializes in art made before the year 2000. The doors open and it’s handbags at dawn as heiresses and collectors storm the aisles to get their hands on a masterpiece. Weaving their way through the stands, something catches their eye. Piles of dirty plates, discarded papers and an overflowing ashtray are nestled among a peppering of artworks by Picasso, Miró, Morandi and Magritte. Is this stuff for sale? Or have we just wandered into someone’s house by mistake?

Helly Nahmad’s stand at Frieze Masters 2014 caused a seismic shift in the landscape of art fairs as they recreated the apartment of a fictional art collector – personal effects and all. Suddenly, a stand wasn’t simply a case of sticking some works of art on the wall and waiting for the rich and famous to arrive – they were a conceptual tool that could transport viewers to a strange and wonderful new land, and perhaps convince them to part with a few more dollars along the way. A clever way of selling art, but an even cleverer way of harnessing the power of social media. Helly Nahmad’s apartment was also curiously designed by the director of two of Robbie Williams’ music videos.

Take from that what you will.

After that galleries began to play catch up to the big idea that fair stands should be a conceptual affair – with a tremendous amount of effort needed along the way. Helly Nahmad returned in 2015 with a re-imagining of an asylum, complete with haunting operatic music and frantic scribbles on the walls. This was the perfect backdrop to a number of astonishing works by Jean Dubuffet – the king of outsider art who praised the instinctive, spontaneous skills of untrained artists like the clinically insane.

In 2017 Waddington Custot jumped on the band wagon when they transferred all the contents of Peter Blake’s studio to Regent’s Park, ranging from memorabilia of wrestling matches and old photographs to art ready for sale. Waddington Custot also turned to Robbie Williams’ director Robin Brown to take the helm, adopting a tried and tested formula built for success.

It was clear the game had changed again. It was not just an artist’s work being offered up to the lions, but the entirety of their creative world. Cannibalistic? Well, it’s all in the name of art – or at least in the name of the art market.

This year the award for most flamboyant and Instagram-friendly stand went without fuss to Dickinson: the London fine art dealer of tremendous knowledge and clout, who recreated the Cornish studio of Barbara Hepworth – fake plants, stuffed seagull and all. This was no small undertaking when you consider the floor had to be reinforced to shoulder the weight of four tons of rocks and a half-ton of bronze sculpture.

While not all galleries get it right, the proof is in the pudding for Dickinson, who sold the most expensive piece from their stand, River Form, during the first preview – more than can be said for other galleries hit by the whispers of Brexit. 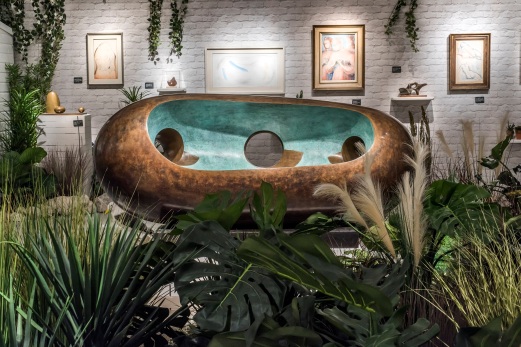 However, with the arrival of Dickinson’s stand, came from the first signs of conceptual stand fatigue. Dickinson might have been the talk of the fair (for better or worse), but most other galleries opted for a far less troublesome affair with simply-designed stands built to display art and art alone. Dealers from different sides of the market also increasingly joined forces and curated stands filled with fascinating contrasts and harmonies.

Does that mean the fad is finally over? Can we go back to looking at art now? There have been a lot of gallery underlings in recent years bemoaning conceptual stands as a cheap trick built for a few Instagram likes and the press, but pretty useless when it comes to snaring a discerning collector.

Like the swings and roundabouts of the market – the art fair goes through life cycles. These days we are seeing a downturn in the conceptual stand, but a rise in the stock value of good old-fashioned white cube curating. And if galleries are ready to strip away the bells and whistles, we should trust ourselves to close those Instagram accounts and get back to the business of looking at art.