Taking America by Storm | Marianna Simnett at the New Museum

“Is it going to hurt?” a young girl asks. “It’ll just be a little bit of pressure,” the doctor promises her, “nothing more.”

Gruesome, nauseating, grisly – these are just some of the words that have become associated with rising British artist Marianna Simnett in recent years. With tales of clinical procedures, hypodermic needles, disease and infection, it is not surprising that Simnett has earned something of a reputation. Under the watchful eye of curator Helga Christoffersen at the New Museum on Manhattan’s Lower East Side, visitors to Simnett’s first institutional show on American soil would be right to come armed with a sense of trepidation. Simnett’s films may not be for those of faint-heart (or stomach), but critics are quick to reduce them to their gory themes. If she wanted to disgust, Simnett argues, there would be much simpler ways to go about it.

Since graduating from the Slade School of Art in 2013, Simnett has received several high-profile nods of approval from the art world, including the Jerwood/FVU award (2015) and exhibitions at the Serpentine Pavilion (2015) and Zabludowicz Collection (2018). Blood In My Milk returns to four pivotal films that have defined Simnett’s oeuvre so far and transforms them into a single multi-channel edit, which moves from a rural dairy farm and a sterile doctor’s office to secret medical facilities.

Splicing her films The Udder (2014), Blood (2015), Blue Roses (2015) and Worst Gift (2017) into one surreal tale is a new practice for Simnett and one that offers a means to challenge the very nature of storytelling. Blood In My Milk presents the viewer with multiple perspectives across five screens, manipulating the narrative while accepting the multiplicity of personal experience. The common ground between Simnett’s four films lies in a warning against the unseen systems of control that punctuate modern life. This moral code is brought to life as nauseating medical procedures and scientific experiments, which distill the body into something contained, ordered.

Simnett’s fable begins in the English countryside with a young girl called Isabel, who the artist plucked from obscurity from a dairy farm in Sussex. An incarnation of innocence with her blue eyes and blonde hair, Isabel is an eerie doppelganger for Simnett, though she argues the likeness was never intentional. Isabel is told she is “too beautiful to go outside” and risk contaminating her purity. Chastity and cleanliness become entwined, evoked both literally and metaphorically by the daily rituals of the farm to ward off disease. Anxieties surrounding the body abound in an apt commentary on the subtle mechanics of society to control our definition of feminine beauty.

As the film shifts, Isabel undergoes a toe-curling operation to remove two pieces of cartilage from her nose. Now transformed, it seems Isabel has been cleansed and made whole again. In other moments a leg riddled with varicose veins receives treatment, a visceral reminder of the tainted body when it has not been purified. Simnett herself, hanging upside down, describes the symptoms as blood pours into her head. The meeting between blood and milk in this film conjures something unsettling – now poisoned and polluted. These corporeal fluids return through Simnett’s narrative, their changeable essence echoing the connection of the female body to breastfeeding and motherhood. Clothed in a white dress and glittering slippers, Simnett later prowls a medical facility looking for answers before a worm wriggles from her mouth. 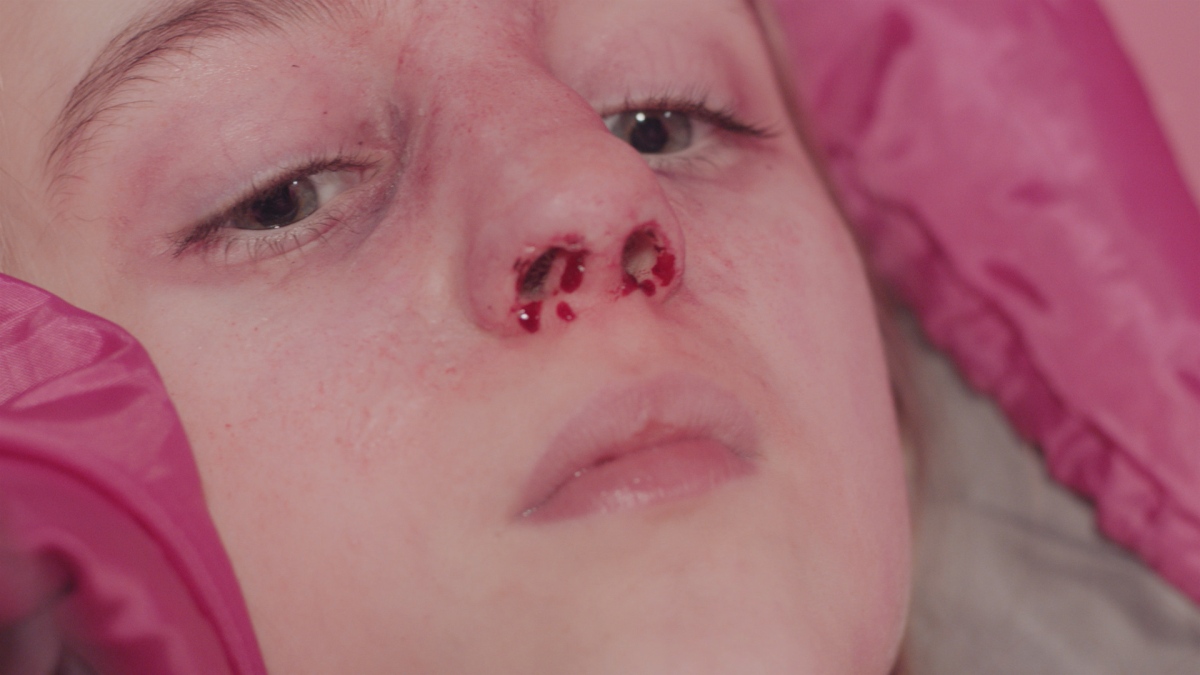 While Simnett draws on a legacy of female artists who have used their own bodies as an expression of grassroots feminism, including Carolee Schneemann, Yayoi Kusama and Valie Export, the representation of gender never takes central stage. In the same breath as Isabel’s story, pubescent boys are forced to endure injections to lower their voices (a treatment Simnett also demands for herself) and cockroaches are transformed into biobots. If anything, Simnett shows gender to be yet another area of life that society seeks to control and define.

As a trained musician, Simnett’s use of song is pivotal as it reminds the viewer through strange and whimsical ditties that this world is far from reality and closer to an allegory or fairy tale. The music for Blood in My Milk is its own sonic language, filled with slurps of milk, the slap of surgical gloves and cuts of the doctor’s scalpel. At one point the fragments of Isabel’s nose reappear as an all-singing-all-dancing duo, protesting indignantly, “but we belong to your interior and you cut us out!”

Cocooned in the New Museum, we are invited to step into a world that lies somewhere between dream, reality and a horror film. But embrace its twists and turns, and Simnett will guide you through a story that is unlike anything your parents ever read to you at bedtime.